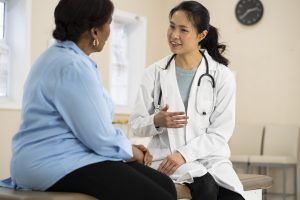 Radiation Oncology is a field in medicine that uses ionizing radiation to treat both malignant (cancer) and benign (non-cancer) conditions. Radiation therapy or radiotherapy is given as part of cancer treatment to control malignant cells by killing the cells or preventing additional growth. The radiation works by damaging the DNA in the cancer cells so the cells will often die during the process of cell division. Radiation therapy can be delivered externally or internally, depending on the disease.

External beam radiation therapy is delivered with a machine, called a linear accelerator, that which focuses the radiation at your cancer. The machine rotates around you to deliver the radiation from different directions. The machine will not touch you, and you will not see the radiation beam. You will be placed in the same position for every treatment. We have Varian linear accelerators such as the TrueBeam® and Trilogy®, as well as a CyberKnife Robotic Radiosurgery System® through the Memorial Healthcare System for our external beam treatments.

We treat patients using a variety of image-guided techniques with External Beam Radiation Therapy including:

The CyberKnife® is a robot that can move and bend around you to deliver radiation through potentially thousands of angles. This allows the radiation to be concentrated on your tumor and minimizes radiation dose to your normal healthy tissues. The CyberKnife® treatment is precisely focused (SBRT or SRS) and delivered with real-time image guidance to the body and brain.

The radiation source can be solid or liquid, and the type of source used depends on your disease and the treatment you need. We offer a variety of types of internal radiation therapy.

In treatment of cancer, radiation therapy may be utilized as:

Radiation Oncology also has several applications in benign conditions including the treatment of: